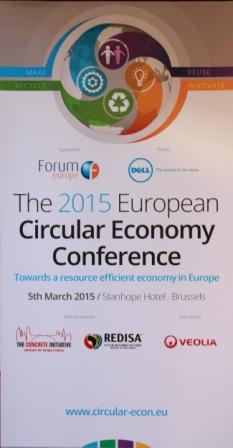 On 5 March 2015, The Concrete Initiative had the opportunity of participating in a panel debate on the hot topic of the Circular Economy.  As readers are aware, a Circular Economy package was launched in the summer of 2014.  However, with a new Commission comes a new perspective, resulting in the scrapping of the existing package infavour of a new, much broader initiative due by the end of this year.

With Commissioner Vella setting the scene in his opening keynote, participants had the opportunity of sharing their thoughts and ideas during three panel sessions.  During his speech, Commissioner Vella spoke of the need of recalibrating business and the economy in the upcoming package, which is due to contain a circualr economy roadmap.  Although waste is an important issue in such a debate, he noted that the new package will have a much broader focus.  He also added that one industry's output must become another industry's input.

Representing The Concrete Initiative, Mr Koen Coppenholle (CEMBUREAU Chief Executive) highlighted during the second session how the cement and concrete industry play a key role in the circular economy.   In order to be truly circular, any policy in this field will have to incorporate a whole life cycle approach.

Availability of raw materials, a wide range of recycling possibilities, durability and longevity are all key issues which we hope to see tackled in the upcoming proposal