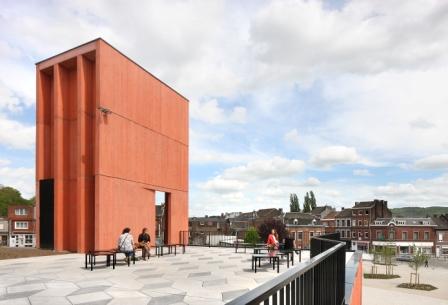 This is a global project that included the construction of a new building for the station, reorganisation of the public space and pedestrian link, the rehabilitation of several streets and a private housing development. The project also includes the refurbishment of a park containing urban vegetable gardens for the inhabitants of the city.

The Marexhe crossroad was designed to become a new centre for different activities linked to the station site, the upgrade and reassignment of the business sector and professional training.

The project aimed to create a sequence of public spaces that are connected to each other between the upper and lower part of Herstal. Indeed, the station marks the new square and is orientated towards the heart of the city as a connector between the different districts (lower and upper Herstal) by requalifying the public spaces.

The project equally intended to connect the landscape with the city. The sequence of public spaces connects the hidden landscape of green hillsides with the valley (the city and its urban scenery) by opening new sights. These viewpoints create links between these previously dislocated elements of the landscape and the urban context.

This global project brought a new blend of urban activities to the new pole and created open spaces as a support for better planned and more active urban life.