Gotthard Base and Railway Tunnel 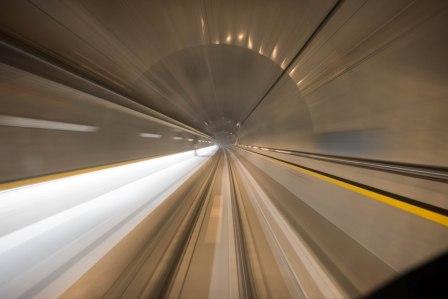 The Gotthard Base Tunnel is the longest tunnel of the world, 57km long. The tunnel shortens travel distance through the Alps and reduces the number of freight trains.

The project is one of the largest environmental protection projects in Europe since it switches most the passenger and freight transport from road to rail. It is expected to save environmental costs of about €120 million each year.

The tunnel is beneficial for more than 20 million people in the catchment area between southern Germany and northern Italy. The train connections are faster, more reliable and more punctual than before.

During peak periods, the tunnel was constructed by 2400 workers in three shifts around the clock.  To cut construction time in half, four access tunnels were built so that construction could start at four different sites simultaneously: Erstfeld, Amsteg, Sedrun, and Faido. A fifth at Bodio was added later.

The trains are expected to run with a speed 250km/h; therefore, durability was a key issue. For this reason, non-ballast track made from concrete was installed, known as slab track. The installation process and the customised concrete formula were planned in every detail and checked in advance.

To reduce the environmental costs of material delivery to the site, concrete train was installed, which enabled the concrete to be mixed in the tunnel itself.  The tunnellers had to bore through a wide variety of different layers of rocks, from hard granite to crumbly sedimentary rock. A total of 28.2 million tonnes of excavated material was removed from the tunnel.

All the aggregates required to make the concrete, such as crushed rock, gravel and sand, were recycled from the excavated material. Microwave sensors and a heating system enabled checks on the humidity, temperature and quality of the recycled aggregates.